“Hey, I really enjoyed making this PowerPoint,” is one of those things nobody says. Haiku Deck aims to change that with its iPad app for making and viewing presentations.

Before addressing the pain point of bad PowerPoints, the founders of Haiku Deck were part of TechStars’ inaugural class of entrepreneurs in Seattle. Their initial idea didn’t fly but it was their experience on the ground, pitching to various investors or partners, that led them to the idea for Haiku Deck.

“We were almost never finding ourselves [pitching] in a conference room,” says Haiku Deck co-founder Adam Tratt. The app now has been downloaded 250,000 times, with more than 100,000 decks made by users.

Despite the introduction of tools including SlideRocket and Prezi, the process around creating and presenting slides hasn’t changed much in 20 years. It involves a lot of Google searching for images, resizing text and on occasion, adding animations that will make your audience chuckle, at least the first time. What you end up making is often nothing to boast about — it gets the point across, but can look jumbled or be hard to read for your audience.

Tratt looked to his past product experience at Microsoft (working on Office) where he became familiar with an important statistic about feature usage: 80% of people use 5% of product features. Often, full-featured software gives people “too much rope with which to hang themselves,” he explains.

That’s why Haiku Deck, much like the poetry format haiku, has a strict framework.

“99% of the world is not a designer.” Tratt notes most people know something looks good when they see it, but cannot pick out a color palette.

The app comes with five “themes,” or templates (with 11 more for purchase). Finding images is a no-brainer — the app actually allows you to input relevant Creative Commons images, with attribution included, as soon as you type in a slide title or body text (you can also upload your own images).

The charts included in Haiku Deck are also unique. In a time when data turns heads, bring it into pitches is crucial, but the numbers themselves don’t always tell the story. Haiku Deck offers three types of charts: bar chart, pie chart and statistic chart. For example, in the bar chart, you would drag the bar to the correct number, say, 80 — and then add a label for each bar. It’s the kind of gesture action you expect when using a touchscreen. 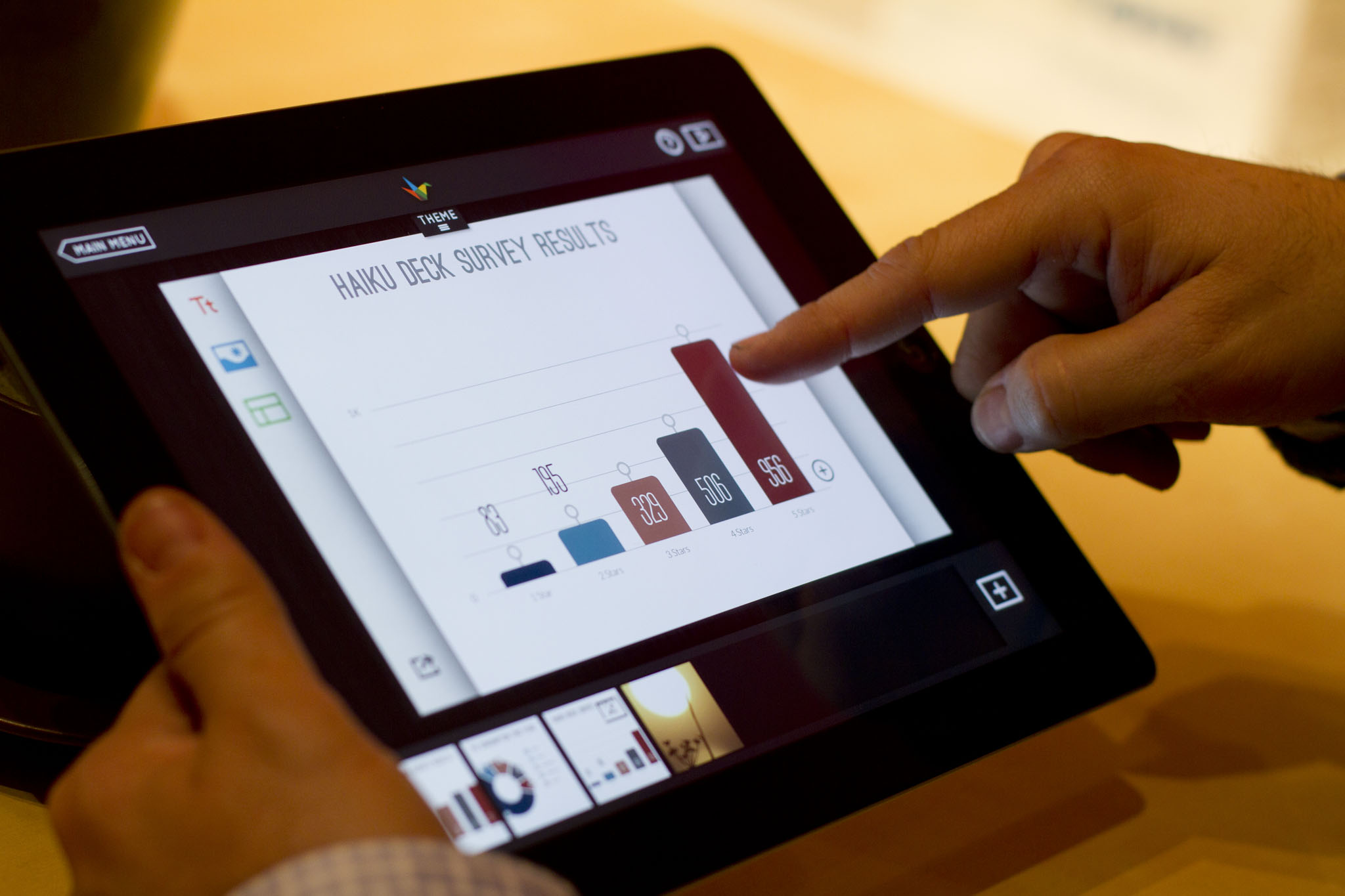 How is it possible to simplify something like PowerPoint down to an app that feels natural on the iPad? Since Tratt knew they’d need to include only essential features, he just looked to the standard tips for making an effective presentation:

While there’s various ways to display your Haiku Deck on a projector for viewing in a conference room, including exporting to PowerPoint, through AirPlay or a dongle, the real win is for presentations both created and shown on the tablet itself. It’s great for walking around a conference, and of course, you can edit and update your pitch information on the fly.

To see for yourself, check out this Haiku Deck on positive thinking. Notice how each slide is limited to one idea and the images never compete with text for your attention. This is not a product of professional, expensive design — just the way Haiku Deck is built to work.